UW gets their King, as top 2017 recruit commits to Badgers

Last week the Badgers and Bo Ryan were snubbed by five star recruit Semi Ojeleye. The 6'6" small forward narrowed his list of potential teams from 11 to 4, and the Badgers did not make the cut. Ojeleye, ranked 38th in ESPN's top 100, had been recruited by Bo Ryan for over a year, but unfortunately Wisconsin was not on his final list of Duke, Indiana, Stanford and Oregon.

So, where does that leave the Badgers 2013 class at? Well, as of now the Badgers have three verbal commits:

first 2013 commit, and as of now the gem of the class. Koenig has a four star ranking and is the 23rd best point guard in the class.

While we didn't get to see much of Koenig last year thanks to a freek thumb injury, we know this guy is quite the talent. Playing AAU ball for the Wisconsin Swing this summer, Koening showed a very high quality of play, even against some of the top competition. He's a great ballhandler, smart playmaker, good shooter, and overall a complete basketball player. It's no coincedence that Koening and Bo Ryan fell in love with each other (in basketball terms of coruse) almost instantly.

The real win of this commit for Wisconsin is that Koenig also had offers from Duke, North Carolina and Virginia. While missing out on one of the top in-state prospects, J.P. Tokoto last year, Bo Ryan redeemed himself by locking up a top talent in Koening for 2013.

To see Koenig in action, check out this highlight mix courtesy of Midwest Elites.

2) Swingman Riley Dearring of Minnetonka, Minnesota. Dearring commited to UW in July and ranks as a three star recruit, and the 42nd best shooting guard in the class, according to ESPN.

Dearring is extremely athletic and is a talented scorer. He's very good at finding a way to the rim and finishing, something that was certainly lacking in last year's offense.

Dearring impressed Wisconsin assistantt coach Greg Gard so much in an AAU tournament in Vegas that he offered him a scholarship then and there.

While measuring at 6'5", it's likely we'll see him mostly at the shooting guard  position in college. Though he does play small forward in high school, he'd be a bit undersized to play the 3 in college.

If he continues his development, Dearring could become a cornerstone of Wisconsin's future. He has a lot of potential and fills a need for scoring in Bo Ryan's offense.

3) Shooting Guard Jordan Hill of Pasadena, California. Hill was not ranked by any major scouting sites, he's easily the mystery piece of this class. The 6'3" swingman had a handful of offers from Ivy League schools, and is known as a very smart kid.

Bo Ryan was very intruiged by Hill, who played in the King James Summer Showcase AAU tournament in Chicago. Just a few days later, Bo offered him a scholarship, which he accepted at his visit a few weeks after.

While he played high school ball in Pasadena last season, this year he'll be attending a prep school in New Hampshire, as he graduated high school as a junior.

"He has the ability to make people aroudn him better players," said Hill's AAU coach. "When he walks in a gym, you know who's in charge."

He's known as quite the playmaker on both sides of the floor. Last year he averaged 14 points and 7.5 rebounds a game for his high school team.

Bo Ryan now has two more scholarships left to use on his 2013 class. Now that the backcourt has been solidified for the future, it now seems he will focus on his front court. With Ryan Evans, Mike Bruesewitz, and Jared Berggren graduating after this season, the Badgers have a big need at both power forward and center.

Here are three potential targets that Bo is pursuing:

1) Vitto Brown: 6'7" Power Forward, Bowling Green, Ohio: Brown is known as a raw prospect with a lot of potential. It's not too often we see very undeveloped guys like this come to Wisconsin, so this would definitley be an interesting prospect for Bo Ryan and his staff.

Brown has another visit to UW coming soon, which could possibly bring a commitment. He has also collected offers from Minnesota, Nebraska, Iowa State, and Kansas State.

2) Kyle Washington: 6'9", Power Forward, Champlin, Minnesota. Washington is another tall, lanky prospect, but certainly more developed than Brown. He's a four star recruit and ranked the 16th best PF in the 2013 class by ESPN. Washington has some top schools pursuing him, including Notre Dame, Ohio State, and some school to the west of Madison… Landing Washington would be a huge win for this class and he'd have the opportunity to be the next great Wisconsin big man.

3) Nigel Hayes: 6'7" Power Forward, Toledo, Ohio. Hayes is a three star prospect, ranked 25th overall at the PF spot by ESPN. He has been dominating his high school 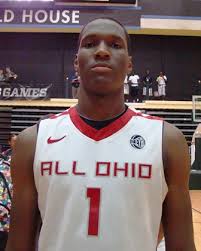 competition. While the Toledo area is usually Ohio State pickings, Hayes said in late July that Wisconsin has been recruiting him the hardest. He also has offers from Stanford, Minnesota, and OSU. Hayes would also be a big get for Bo Rya, especially since he's from Buckeye country. It seems that the Badgers have a good shot at landing him.

Thanks for reading and check out my Twitter account to keep you updated on all things Wisconsin basketball!

The Oakland Aces - a retrospectiveThe Outside Corner